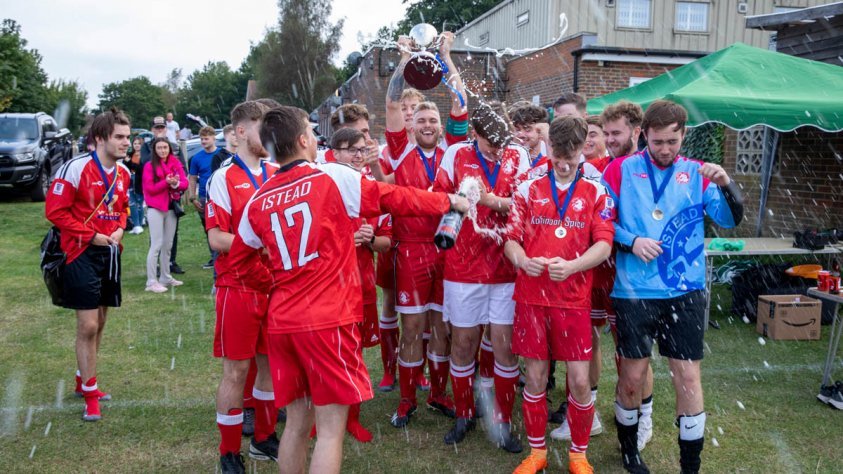 Over 400 people turned up on Saturday, 4th September, to watch this year’s Elliott Holmes Memorial Cup at the Istead Rise Community Field. To make it more entertaining this year, there was the addition of a variety of stalls and two more matches added to the line-up, including Dads and Grandads!

The day was officially opened by retired GP and Deputy Lieutenant of Kent, Dr. Bhargawa Vasudaven (known locally in Gravesend as ‘Vasu’), on behalf of Our Lord Lieutenant of Kent Lady Colgrain. Vasu has, for many years, actively been helping to get better and faster access to health services. He delivered a touching speech, saying what we can achieve as a close community and the importance of sport and outdoor activities to improve our mental health.

The sporting event commenced with the Grandads v Istead Rise 7. A staggering 285 years separated these sides. To put than into perspective, 285 years takes you back to 1736 when George II was on the throne! Thirty years ago, it would have been hard to imaging your dad still playing football when you were 20, let alone your Grandad! And they were by no means a push over. A soft goal, as a result of a deflection off a defender, was the only thing that stood between them at the final whistle, and the Istead Rise 7 finishing with a 1-0 win. Scott Thomas, organiser of the event, said: “It was touch and go. If it went to penalties, it could have been an embarrassing result for us.” Kai Holmes, Elliott’s cousin and Honorary Captain for the day, lifted the cup for the Istead Rise 7.

Next up were the dads. Fitness was the order of the day with the Istead Rise 7 controlling much of the game. The Dads lack of match fitness showed and the Istead 7 sealed a comfortable 5-1 win.

The Main match, Istead Rise 11 v Meopham Railway Tavern 11, started with a one-minute silence, to remember Elliott Holmes and all those who have sadly taken their own life suffering with their mental health – a stark reminder to why every supported the event. A late goal by Istead Rise resulted in a 1-0 win for the home team and meant they lifted the Elliott Holmes Memorial Cup for the second year running.

Peter Scutts, Elliott Holmes Stepdad, took the opportunity to officially launch the Elliott Holmes Memorial Fund. A fund created to help improve the Mental Health and Wellbeing of young people in the local community, including working with local Primary and Secondary schools to fund and fast track students suffering with Mental health Issues. Their target is to help 10 students by raising £7,000 in the first year. They are also looking for local businesses in the community to join forces and become a EHMF partner in helping fight mental health on a local level. Alternatively, people can help by running a fundraising event for the Elliott Holmes Memorial Fund. If you would like to take part, then simply email Peter Scutts at support@ehmf.org.uk

£750 was raised by the players, registering on line and donating directly to The Samaritans. After event costs, a further £1,634.80 was raised on the day and split between Honour and Glory, a boxing Gym helping young people suffering with Mental Health; The Istead Rise Park Project, to encourage children to mix and take part in outdoor activities; and the Elliott Holmes Memorial Fund, to help kick-start a new local community effort in fighting mental health.

More information on our aims, or indeed if you would just like to donate to the Elliott Holmes Memorial Fund then visit:
https://www.justgiving.com/crow…/elliottholmesmemorialfund

Thank you everyone who supported the event!
Scroll to top